Researchers have shown a new compound delivered in a nasal spray is highly effective in preventing and treating COVID-19 caused by the Delta variant in mice.

The researchers, including at UBC, Université de Sherbrooke, and Cornell University, believe this is the first treatment of its kind proven to be effective against all COVID-19 variants of concern reported to date, including alpha, beta, gamma and delta. Published today in Nature, the research opens the door to developing a therapeutic spray for humans.

Variants of concern, including the recent Omicron variants, have reduced vaccine effectiveness, but senior author Dr. François Jean, associate professor in the UBC department of microbiology and immunology, says early, still unpublished results from his team show promise that N-0385 is also effective at blocking Omicron variant infections in human lung cells. “Our unpublished results represent encouraging findings with the current rapid propagation of Omicron BA.2 around the world.”

The work on SARS-CoV-2 variants was conducted
at FINDER

“Unfortunately, with another wave of an Omicron variant hitting the U.K., Europe, and China and our knowledge of how these waves occur, this may be what we see in Canada in the near future. Once approved, this compound could be used in combination with already available drugs that inhibit the virus’ replication, to provide a stronger defense against COVID-19 variants of concern,” says Dr. Jean, founder of FINDER, the state-of-the-art level three biocontainment facility where the work on SARS-CoV-2 variants was conducted. 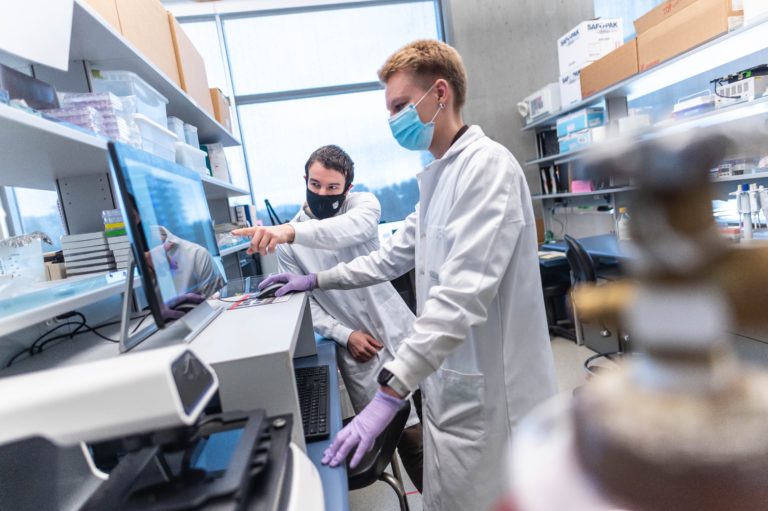 The specially designed compound, named N-0385, blocks a particular human enzyme’s activity, used by the virus to infect a host cell. The small molecule was developed by Drs. Richard Leduc, Éric Marsault, Pierre-Luc Boudreault and their team at Université de Sherbrooke. UBC researchers tested four variants, including Delta, in human lung cells and organoids, tissue cultures that can mimic the organ they’re taken from, and found that N-0385 inhibits infection, with no evidence of toxicity. “The compound is unique because it blocks entry at the cell surface, without having to get into the cell, which prevents it from causing any detectable cell damage. As well, it’s highly potent, in that it needs only a tiny amount to work very effectively,” says co-author Dr. Andrea Olmstead (she/her), research associate in the department of microbiology and immunology.

In a preprint, the researchers at Cornell University led by Associate Professor Hector Aguilar-Carreno showed that genetically engineered mice infected with the virus causing COVID-19 and given a daily dose of the compound in a nasal spray for four days. All ten of the treated mice survived infection, compared with only 20 per cent of the untreated mice.

In the newly published paper, N-0385 was tested against the Delta variant, and was found to not only help with prevention of COVID-19, but also treatment 12 hours after infection, including with infection-related weight loss, and levels of the virus in the mice lungs, compared with controls.

The enzyme which N-0385 targets is present in nasal cells, where the virus tends to enter, making a nasal spray the most practical and effective way to administer the compound. In addition, no mutations relating to the virus which causes COVID-19 have been found in this enzyme’s mechanism so far, as has occurred with other enzymes and COVID-19 variants, making it a useful target for defense against future strains of the virus, says Dr. Jean.

The compound has the potential to be used as a broad-spectrum treatment against other viruses which use the same mechanism, Dr. Jean says, including influenza viruses such as influenza A, H1N1, and influenza C. “Even not knowing what you’ve been infected with during flu season, you could potentially be prescribed a nasal spray to treat coronaviruses and the flu.”

However, the spray should be used in combination with other drugs already on the market, he says, as the compound is an entry inhibitor, blocking entry of the virus to cells while other drugs reduce replication. “The big picture is, there are multiple steps in the life cycle of a virus. The first step is entering a cell to pass on genetic material, then it goes on to replicate. So you would use both drugs: N-0385 could block most of the virus’ entry, making less work for the replicator drug.”

The project teams are working with Ebvia, a private company, to secure funding for clinical trials. Future avenues of research at UBC and Université de Sherbrooke include optimizing N-0385 when used in combination with recently approved drugs to treat COVID-19.